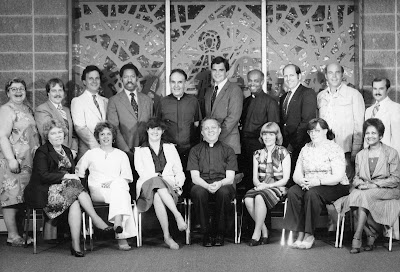 Cecil Pickert became pastor in 1978. Fr. Paul Kirschner of St. Anastasia’s gathered parishioners who would make trips to the Bowery every Saturday morning.(In 2008, Steve Weisenbach coordinates parishioners who gather baked goods from local bakeries, make soup, pack clothing and make that trip to the Bowery.) Fr. Cecil was also very supportive of the Filipino American Society of Teaneck (F.A.S.T.), which started in 1979.

In the late 1970s, Fr. Cecil continued discussion on refurbishing and remodeling the interior of the church as well as re-positioning the altar on the east wall. The latter move was proposed in response to the recommendations of Vatican II. The purpose of the recommended change was to assure the maximum involvement of the congregation in the services. These discussions met with very strong reactions. Many people agreed that the changes would bring the central celebration of our faith much closer to the people; others were dismayed at the prospect of removing the traditional altar and losing the long stately center aisle.

In 1980, Teaneck had 39,007 residents. In 1983, Fr. Cecil left the parish, becoming a parochial vicar at Immaculate Conception and St. Joseph Parishes in Kansas from 1984-1987, and pastor there from 1987-1994. He also worked in Our Lady of Mt. Carmel Parish in Louisville, Kentucky. He returned in 2002 to St. Anastasia’s to celebrate a Thanksgiving Mass for F.A.S.T. He retired to Whitefriar’s Hall, Washington, DC and passed away in July 2005.
Posted by Patricia O'Brien Libutti at 7:42 PM

I loved Father Cecil, he baptized me and my children and renewed our marriage vows. He blessed our home when we bought it. He was so special to me as I became a Catholic in 1999 in Louisville, KY. RIP