Pictured: Fr. Tom Jordan surrounded with friends from the past. 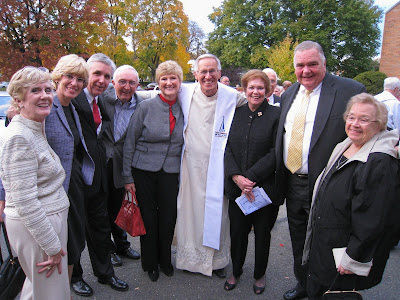 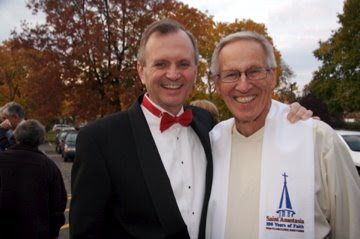 Fr. Tom Jordan became pastor in 1983---and continued the discussion of remodeling the church. Two sets of blueprints show differing concepts for the refurbishing. One shows an altar brought forward further into the congregation; a second shows a plaza outside the narthex and additional parking to the left of the church. Neither plan was totally realized. In 1987, the work began and included refurbishing and repainting the upper church as well as relocating the altar on a platform centered against the east wall. A Baroque architectural element, a baldichino, was constructed, and hovers above the altar, subtly drawing the eye upward. A new sound system was installed. Slowly the parish became more comfortable with the new configuration. In 2008, a refurbishing, repainting, and relocation of the choir and organ continue the 100-year-old tradition of beautification.

Fr. Tom had a deep interest in the welfare of parish youth. Under his direction, the lower church was refurbished for use by the youth of the parish and a youth minister was hired. This effort to serve young people successfully has continued In 2008, Ms. Faith Rose plan many opportunities for faith experiences and social interaction.


In the late ‘80’s, the school was facing great financial difficulty. There were fewer nuns available to teach in the school, making it necessary to hire an increasing number of lay teachers at higher salaries. St. Anastasia's School mirrored the 50 percent drop in enrollment in archdiocese schools since the 1970's.
For the school to continue, the parish needed to provide the school with ever-increasing subsidies. The Archdiocese recommended that schools across the diocese, facing similar problems, combine into regional schools. After much prayer and soul-searching, St. Anastasia closed its independent parochial school in June 1990. St. Anastasia’s School combined with St. Cecilia’s in Englewood in a regional school, forming St. Cecelia’s Interparochial School. In 2008, the interparochial school continues.

The school building would serve many others besides the parishioners. Others who have used the school or the chapel include the Saint Andrew Kim Korean Catholic Mission and the Dar-Ul-Islah Muslim Community, which during Ramadan, prayed at St. Anastasia’s while awaiting the construction of their building. From 1974 to 1999 the African American Center met in St. Anastasia’s School rooms and taught African and Afro-American culture, history and arts to young children on Saturday mornings. By 1998, the former St. Anastasia’s School building was rented to the Community School in Teaneck. This rental provided the parish with a key source of income. It remains the school’s tenant to this day. Currently, the chapel is used for senior lunches, children’s liturgies and Cornerstone gatherings. Known in the past as the chapel, then the Youth Hall,the original church building is known as the ”Little Church” today.
Posted by Patricia O'Brien Libutti at 7:41 PM